KPC is Set to Play a Bigger Role in the National and Regional Economies, says outgoing Chair John Ngumi

KPC is set to play a much bigger role as a strategic state agency in the vital and growing oil & gas sector because of its increased operational efficiency, outgoing Board Chairperson John Ngumi has said.

In a statement to staff, Ngumi acknowledged that his 5-year tenure in KPC has registered many notable achievements and he bows out of the company a happy man with his head high.

“Since I joined the Board as Chairperson in April 2015, we have seen astounding achievements, and suffered setbacks that could have been fatal to any other company that did not have KPC’s long history, resilience, resources and people,” he told staff.

The former KPC Board boss said that when the Company took on one of the largest ever corporate loans in Kenya in 2015, US$ 350 million (KES 35 billion), to help finance the construction of Line 5, that was a major milestone in Kenya’s corporate history.

“This loan was extended by banks purely on the basis of KPC’s balance sheet strength; the lenders did not ask for or need a government guarantee. We have continued servicing that loan satisfactorily to the tune of nearly KES 2 billion every quarter,” he informed staff.

Ngumi also hailed KPC for successfully managing the operations and performance of another parastatal, Kenya Petroleum Refineries Limited, and are now in the process of finalising the complete union between the two state agencies.

Working with Kenya Ports Authority and Kenya Railway Corporation, KPC has also helped commence the rejuvenation of Kisumu Port as a major regional fuel transport hub because transporting petroleum products to the region is a major part of the Lake Victoria Transport Initiative.

“We await the completion of Uganda’s two oil jetties on the other side of Lake Victoria before we can operationalise Kisumu Oil Jetty, which is ready for use,” Ngumi said while hailing KPC for working with Kenya Railways, the Kenya Defence Forces and the National Youth Service in bringing back into operation the Nairobi-Nanyuki Railway, which is going to be transformative for the Mt Kenya and Northern Kenya regions.

Ngumi told staff that COVID-19 and its aftermath have brought out the best side of KPC. The corporation moved quickly to work with Government, corporate partners and other Kenyans to produce over 1.5 million litres of sanitisers for free distribution to needy Kenyans across the country.

“We also made a grant of KES 55 million to the NYS, which enabled them produce 1.5 million masks, also for free distribution to needy Kenyans,” he concluded adding that KPC has indeed improved relationships with stakeholders namely the shareholders, oversight agencies, and business partners.

The incoming Chairperson Rita Okuthe said during the handover ceremony that she was very grateful for the privilege to serve the people of Kenya in the new capacity.

“I thank His Excellency President Uhuru Kenyatta for the confidence he has bestowed in me. I will serve the nation with selfless dedication and hard work,” said Okuthe who is the first ever lady to Chair the KPC Board of Directors.

John Ngumi now becomes the new Chairperson of the Industrial and Commercial Development Corporation (ICDC) having been appointed by President Uhuru Kenyatta on Friday, August 7, 2020.

The move came after the President signed an executive order governing the operations of the Kenya Ports Authority (KPA), Kenya Railways Corporation (KRC) and the Kenya Pipeline Company (KPC). The order is set to guide the central management of public port, railway and pipeline services under the Kenya Transport and Logistics Network (KTLN) with the coordination of the Industrial and Commercial Development Corporation (ICDC). 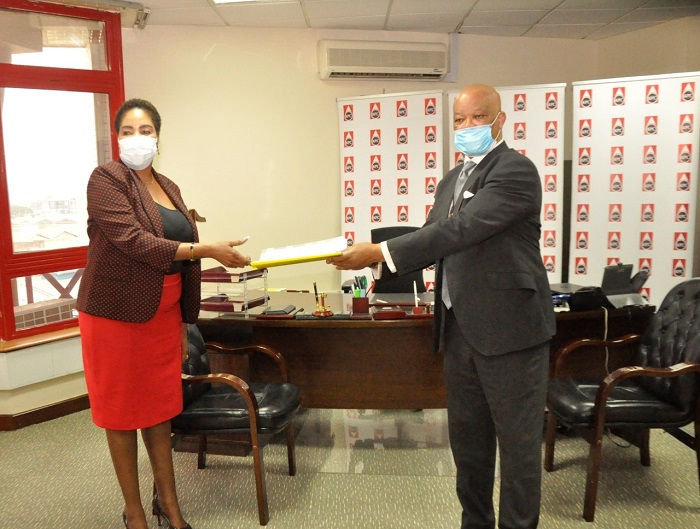